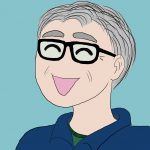 Following an unremarkable childhood, he was precipitated into an identity crisis at the age of 14 by falling desperately in love, and thus rapidly transitioning from the state of an individual plotting all day how to snare a girl, to the new state of a couple discovering “coupleness” and wondering what else life had in store. It is not clear whether or not any of this had anything to do with the fact that, despite microbiology not being part of the school curriculum, and microbiological advances not being the typical reading-discussion material of pubescent boys in those days, at the age of 17 he knew with frighteningly absolute certainty that he would become a microbiologist.

He subsequently collected his micro-credentials at Bristol University, where he decided that research might be sort of fun, after which he dallied in various academic institutions in various parts of the world – Bochum, New Haven, Palo Alto, West Berlin, Geneva and, most recently, Braunschweig. In an otherwise unremarkable career, he had the privilege of working with some of the most outstanding – mostly Spanish and other Latin – intellects in microbiology (one of whom regularly appears disguised under a nom de plume in the Yarns), who made some interesting contributions to advances in microbiology, particularly environmental microbiology.

During the dalliance in Geneva, at the age of 38 he had his second identity crisis – again precipitated by falling desperately in love – this time with a neonate (James) and transitioning from the state of a couple of similar aged adults doing adult things, to parents focused 200% of the time on trying to keep alive an infant exposed to all the hazards of modern civilisation and, in the process, doing child things again. Humour was the only thing that kept everyone nominally sane. In 2011, he retired from his day job and spends most of his time in the beloved Ford Focus of his current partner, Joan, traveling the highways and byways between Switzerland, Germany and the UK, where he spends the non-Focus time. With Joan as Admin, he edits Environmental Microbiology, Environmental Microbiology Reports, and Microbial Biotechnology and, with James, explores the interesting interfaces and overlaps of biomedical research, healthcare, and health policy and governance.

His role model heros (actually heroines), in addition to his wife and mother, are Orla Guerin and Lyse Doucet, incredibly courageous correspondents reporting from dangerous trouble spots of the world, Joanna Lumley, tireless defender of the Gurkhas who sacrifice selflessly for Britain, in addition to being an outstanding humorous actress, and Jessica Ennis, Olympic giant.

Oh, and yes, he also amuses himself, and collaterally drives his family insane, by periodically disappearing into the world of The Absurd Microbe and composing the Yarns, with a view to amusing budding microbiologists, adding new dimensions to their knowledge complement, and fostering their curiosity and receptiveness to serendipitous observations. In the back of his absurd mind, he nurtures the faint hope that some school children will stumble across TAM during their random meandering through the internet and, as a result, commit at the age of 17 to becoming microbiologists. 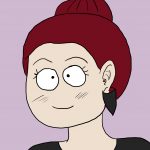 Fran (a.k.a. Franziska Jebok) provides the cartoons for the absurd Yarns and The Absurd Microbe and puts to paper – or rather screen – what Ken imagines.

Born in the small town of Wolfenbüttel (the one where universally-renowned Jägermeister, the multifunctional digestive {see also Microbiome Yarns: Bifidobacterium, human milk oligosaccharides, synthetic biology and spooks – which you can find under Newstuff} comes from), she spent her formative years in Braunschweig (the city of Henry the Lion who founded several cities, including Munich, and also the city of the mathematician Gauss, whose name is used as the unit of magnetic induction, and which is also home to Germany’s oldest Technical University and several microbiological research institutes, including the German Collection of Microorganisms and Cell Cultures [the DSMZ] and Helmholtz Centre for Infection Research [the HZI]), before moving to a tiny village south of Wolfenbüttel which is not even worth a mention, except you might know it for the nearby refuse disposal site – yuck.

Already in kindergarten, she displayed interest in drawing and painting – though not in the Waldorf-approved-method of creating calming and pedagogically valuable patterns with wax crayons, but rather drawing dinosaurs, people, houses and making up “Chinese” signs. Still, she promised her paediatrician that one day she’d take over his practice, but also dreamt of becoming a professional singer (singing is still a hobby of hers), an astronaut or astronomer or aeronautical engineer, or anything else to do with space.

Since her A Levels were not as good as they could have been (being both a professional procrastinator and a lazy person are not exactly a good combination), she abandoned paediatrics or anything-to-do-with-space and started studying English and Chemistry at the TU Braunschweig with the goal of becoming the best teacher ever. But, as life goes, another decision was made and she and James – who met each other at a party in Wolfenbüttel, but that’s another story – moved to Freiburg im Breisgau (the lovely, but way-too-touristy city with those nice-to-look-at-but-bloody-dangerous-for-absent-minded-people Bächle, and the new University Library [1] that leaks rainwater, blinds people, has way too few work places and, in general, looks like a UFO that just landed in the middle of town) where she (finally!) finished something and acquired a Bachelor of Arts in Educational Planning & Instructional Design from the Albert-Ludwigs-University.

Now, as a grad student in Educational Sciences – Teaching & Studying, also in the beautiful city of Freiburg, she engages in drawing cartoons for The Absurd Microbe and the Yarns, when she’s not learning, working, singing, cooking (it is said by others who should know, that she is an exceptional cook and that her carrot cake would win the Great British Bake-Off hands down), eating, sleeping or exercising dogs from the local animal shelter.