The Microbiome Channel is one of the news-information-knowledge network of Global Environment Television, a subsidiary of Gobstopper Gulp Enterprises.

Abigail Repor-Tastory is the host of the GET’s highly popular program “Microbiome Discoveries That Change Our Lives”.

She grew up in Chattanooga, TN, has a BS in Biology from Savannah City University, GA, and an MA in Media, Culture and Communication from the Ideal University of New York, NY.
Abigail has been working in educational television for 12 years, and for the Microbiome Channel as Presenter of the series Microbiome Discoveries that Change our Lives for 10 years. 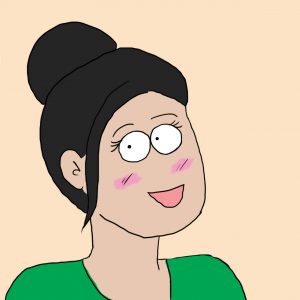 Anastasia Noitall-Most is the youngest daughter of the famous Dr. Noitall of UC Berkeley* who published prolifically on all manner of things in Science in the 1990s and who had a major influence on the researchers of the time.

She grew up in Berkeley, has a BSc in Microbiology from UC-Death Valley and a PhD in cell biology from the Arctic University of Sweden.
After a series of postdoctoral research training posts in France and the UK, she joined the Streber Elite University in LA as Professor of Applied Microbiology and Science Communication. 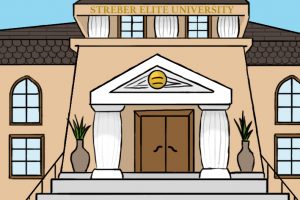 The Streber Elite University is a private university on prime real estate overlooking the Pacific Ocean.

It was founded in 1958 by the renowned Madison Avenue advertising magnate, political publicist and philanthropist, Ava Gootime, and is the best funded university in the world with the highest fees and highest selection thresholds.

Its motto is “Do not do unto others what you would not want done unto yourself (but, if you must, do it first, comprehensively and discretely)” and its faculties represent all major disciplines except engineering, which the Founder considered not to constitute an appropriate calling for the spirited brilliant young people who will be tomorrow’s leaders.

Its Departments of Public Perception and Spin Doctor Science, and Lobbying Science and Political Obfuscation, are always top of the university rankings.

Unlike typical North American universities, it does not emphasize team sport, and its sports activities are largely confined to martial arts, survival-type activities, and diverse mind-expanding games, primarily focused on the theory and practice of opinion manipulation and character assassination.

All students are required to take basic courses in economics, auditing, and the legal aspects of asset transfers and investments.

Many of its faculty are members of global organisations and philanthropic organizations.